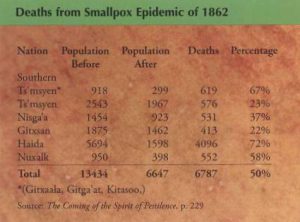 The Smallpox Epidemic of 1862: Source Detectives

In this activity students will slowly uncover clues in the form of photographs, artwork and a number of primary and secondary text sources, about the smallpox epidemic of 1862 that began in Victoria and spread up the coast of what is now British Columbia. The epidemic devastated the communities of the northern First Nations along the coast. The Southern Ts'msyen and Haida were particularly hard hit, with 67% and 72% respectively perishing due to Smallpox.

Note: This activity was originally created in SD52 (Prince Rupert) for students living on Ts'msyen Territory.

The companion resource: Disease Transmission Lab is highly recommended to go alongside this activity.

Sneak peak to the upcoming summer book selection for the Intermediate Book Club! Register here to get your books!

Come and PLAY at Ready Set Learn will take place this Thursday April 21st, at Mansfield Park from 4-6pm for families with 3-5 years olds.
Pre-register through City of Nanaimo Parks and Rec or sign in at the Welcome table.
#ReadySetLearnWithNLPS

Interested in providing safe and enjoyable outdoor learning opportunities for your students? Tomorrow is the last day for NLPS staff to register for the OCC Field Leader Level 1 Certification! Email thelearningline@sd68.bc.ca for more information.

Next week marks the start of our Hul̓q̓umín̓um̓ Introduction Phrases. It is customary to share what community you come from during an introduction. Try it next week!